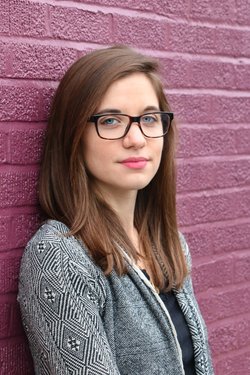 Liesel Hamilton currently lives in Northern Virginia where she is completing her MFA in Creative Nonfiction at George Mason University. During the summer of 2017, she was awarded one of the inaugural Cheuse Center travel grants in order to travel to Germany and Poland to compile research about her family’s history, and the cultural history of her grandmother’s homeland. Cultural and familial memory are also central to her work, as she tries to rebuild stories of her grandmother’s time as a WWII refugee, despite her grandmother’s dementia.

When asked what she wanted to learn by the end of her time abroad, Liesel said, “…it will take coming home and writing about and processing…until I really learn what I wanted to learn.” You can find her full interview on our website. We congratulate Liesel on all the work she has done and will continue to do, and we hope to read more of her work very soon. 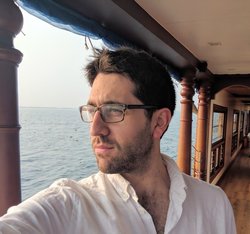 Sam Ashworth lives in Washington, DC and is an MFA candidate in fiction at George Mason University. He was one of two inaugural travel grants given by the Cheuse Center for MFA students. Sam traveled abroad to France in order to research the French culinary industry for an upcoming novel about a middle-aged American chef who learns his trade in France. To do so, he spent a week as working as a stagiaire (trainee) in a Michelin-starred restaurant in a town in Provence called Lourmarin.

By working 14 hour days cleaning out fresh squid, or cleaning the walk-in freezer, Sam had hoped to understand just how a stagiaire lives, a crucial point to his novel. However, after a week, he “began to spend less time working, and more time observing another kitchen and interviewing people. And in so doing…actually learned much more about what it is to be a chef.” You can find Sam’s full interview on our website, and we hope you will join us in congratulating him on his work thus far, and in the future.